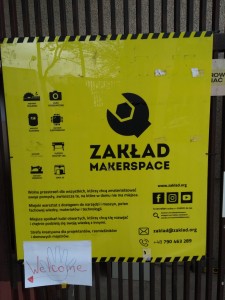 I am just coming to the end of my visit to Zakład Makerspace, which is a giant makerspace in Poznań, Poland. I have been attending a conference there called Poznań Seminar which has been set up by the Vulca Project. I will break documenting this event into a couple of posts. Here, I just wanted to share some pictures and information about this amazing site!

Zakład Makerspace was founded in a disused chocolate factory. When the space was initially set up the factory was derelict, many rooms were in very poor condition and water and electricity supplies needed repairing and installing. On the 1st floor, some machines and ovens from the factory are still present. One of the volunteers described how there was an inch of ancient chocolate caked on the floor which needed to be cleaned! 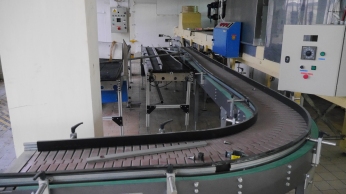 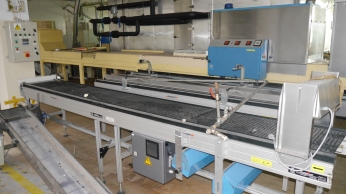 Zakład Makerspace is a non-for profit space which is largely run by just a handful of  volunteers, and is  supported by membership fees. Income is also generated through a co-working space, rental of facilities, events and occasional contracting jobs. Makers who make a profit from their practice make a small contribution to the space. 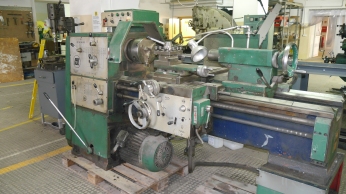 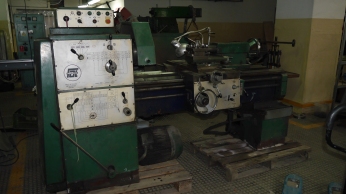 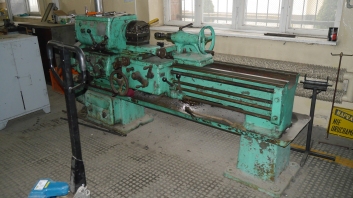 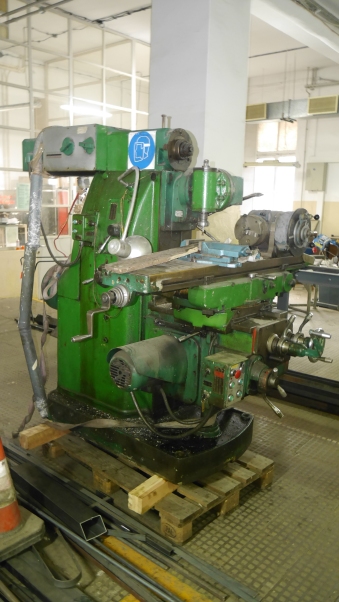 The metal workshop is a large and impressive room which has two large lathes amongst an array of other machines, apparently people come from all over Poland to learn how to weld in Zakład. The machines have come from a variety of sources, some sponsored, some donated and some acquired by the space. Some of this machinery had only just arrived at the space when I visited.

Each of the workshops hosts monthly inductions for new members and from a conversation I had with one of the volunteers there are some further inductions and rules of use around some machines. The space as an organisation is in need of some individuals to come in with skills as not all the equipment can be utilised at present. 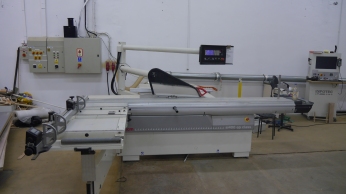 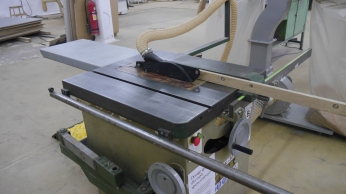 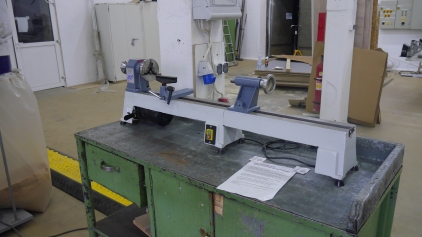 Next door to the metal workshop is the wood workshop. This also has a host of machines including a large flatbed CNC – a good range and well maintained set of handtools and a couple of machines I didn’t recognise. One focus of activity in this space is the upcycling and reuse of discarded furniture. I also saw some amazing traditional acoustic instruments made by local maker Anton, who was also and expert at playing them (I will save this for another post). 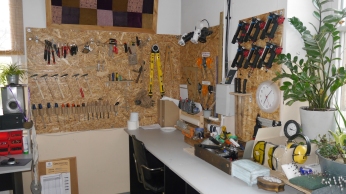 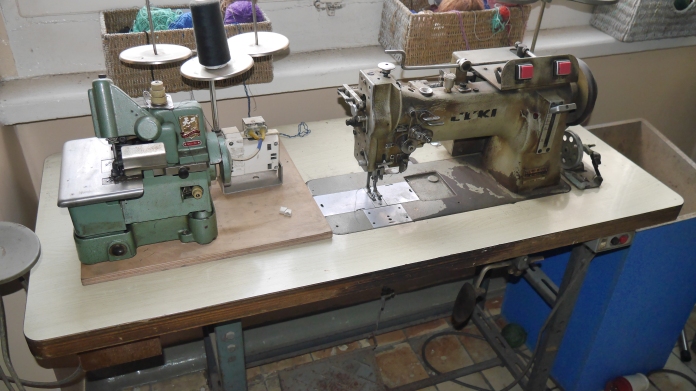 Upstairs can be found a large textiles space which is host to a number of domestic and industrial sewing machines in different conditions, an over-locker and a wide range of hand tools and sewing materials. There is plenty of tabletop space and materials for making here, and the space is clearly well maintained. 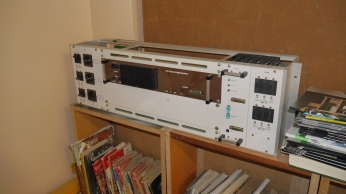 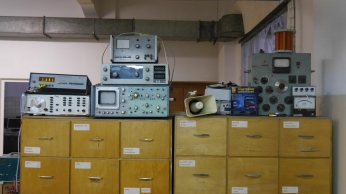 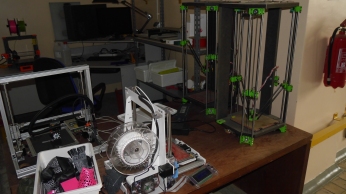 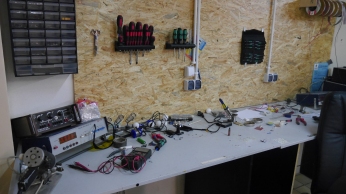 Distributed around the first floor are some electronics workbenches with soldering irons and bench test gear – a lot of this stuff is pretty old, but pretty cool looking – I found a ‘digital’ volt meter that has a Nixie tube display (pictured), these are old Russian vacuum tubes – in their natural environment for once! There were also large printers, 3D printers and a miniature CNC and lathe scattered around.

Other than the 50 or so members that use the makerspace, there is also a co-working / shared space on the 1st floor – without sharing too much as I don’t have anyone to ask permission, it looks like people could be working in software or design here, and there are also some ceramics and textiles projects set up.

Finally, and integral to a large space like this – Zakład has a huge storage area on the ground floor. I think members can rent storage by individual pallet. 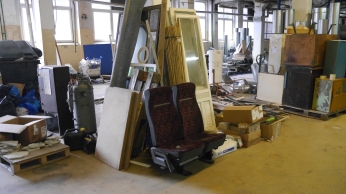 So – I hope you enjoyed this post. It is an amazing and expansive space, imagine what you could make here! The volunteers I have met are lovely – if you are a maker you should consider a small excursion. I stayed in a hostel about 10-15 mins away from the space, and it was about £68 to stay for 4 nights, which is very agreeable. Let me know what you think in the comments below. 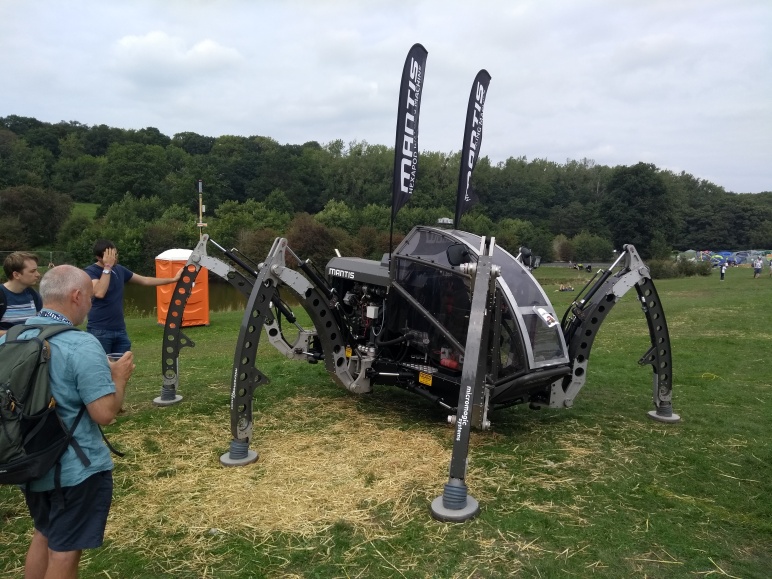 Kim and I just got back from Electromagnetic Field Camp 2018 – a bi-annual festival celebrating all things hacking and making. It was a spectacular and unique event with a huge amount of fun to be had.

You are welcome to share this page and our pictures!

We might have some more pictures and a video or two to share still as we sort out our other devices! Stay tuned!

EMF had a special badge for participants – it was a pretty featured hackable microcontroller dev-kit… well actually it was closer to a fully featured hackable mobile phone as it included a GSM module and antenna. It also had a bunch of sensors, built in WiFi, buttons and a colour LCD. I had some trouble actually hacking the badge as my laptop doesn’t deal well with native usb serial ports, but did manage to get some things going… 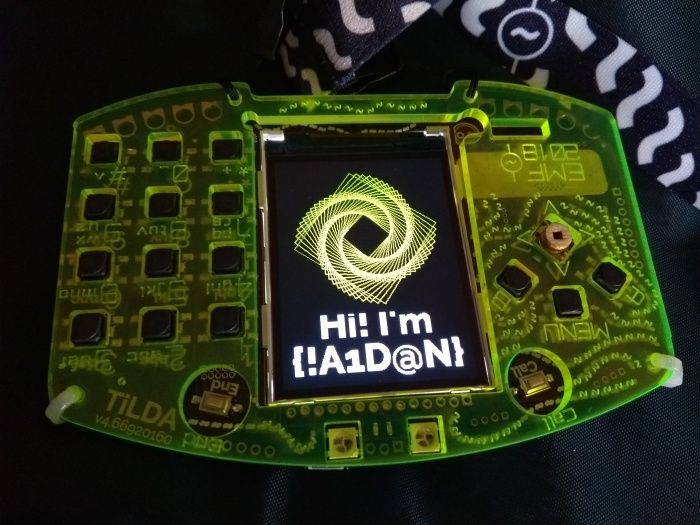 The entire camp had a temporary GSM and WiFi network set up – this along with power was distributed somewhat hilariously via jerryrigged portaloos, the beacon on top would spin energetically visualising the amount of traffic at the hub 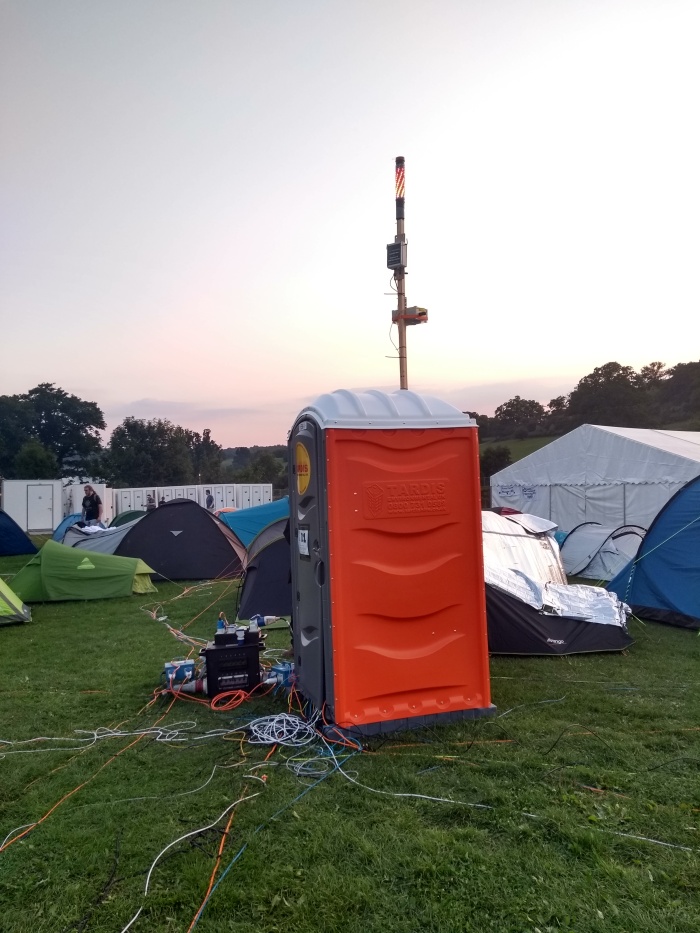 It wasn’t unusual to find WiFi radio boosters in odd locations around the site: 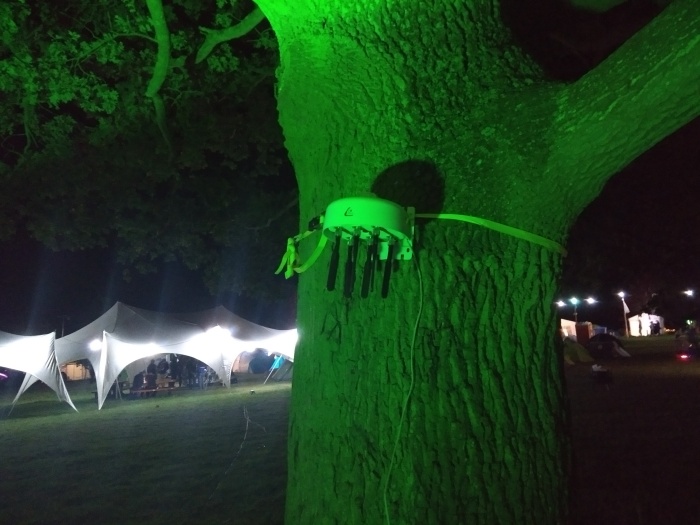 The Robot Arms was the biggest watering hole for thirsty hackers on site. The bar like much of the festival was largely volunteer run… 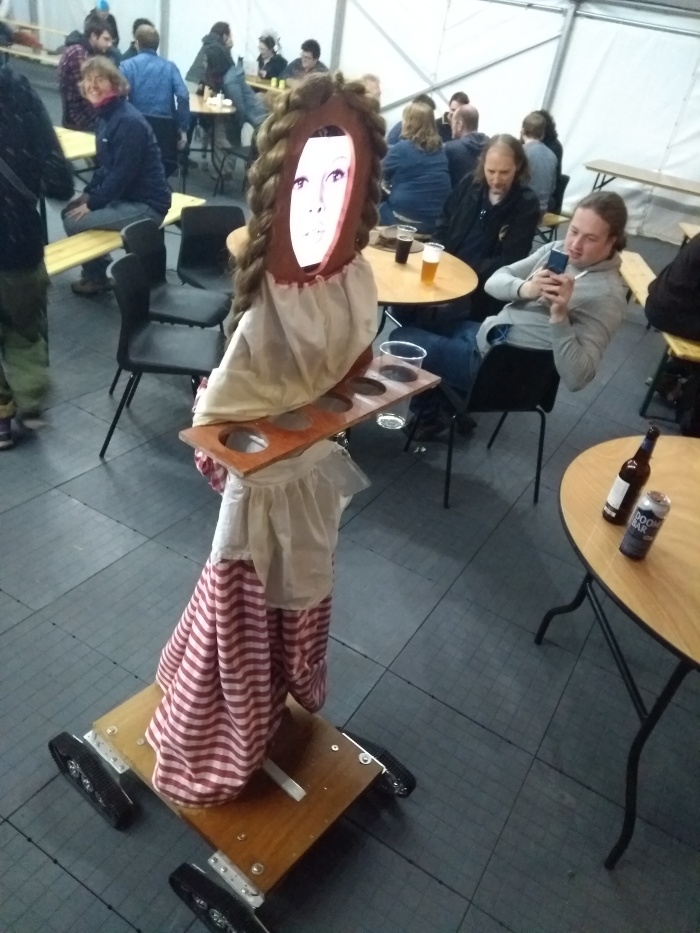 There was an awesome, I mean AWESOME arcade tent at the festival with a number of rescued classic machines including Star Wars, House of The Dead, Mortal Combat, Frogger, Space Invaders and much more – we spent a good amount of time in there!

There were far too many interesting things going on at once, it was impossible to see them all (and often too interesting to remember to take photos!)

These guys were running a blacksmithing workshop from about 8am to 1am every day!

A high altitude balloon launch by the HABHUB Village crew:

There was of course a very healthy serving of robots, mechs and automata…

I think this little guy was the EMF Roamer, you can see on the flag there is a QR Code to scan, scanning the code would take your phone to a webpage with a live stream from the robot, and a set of controls so you could drive it around the site! 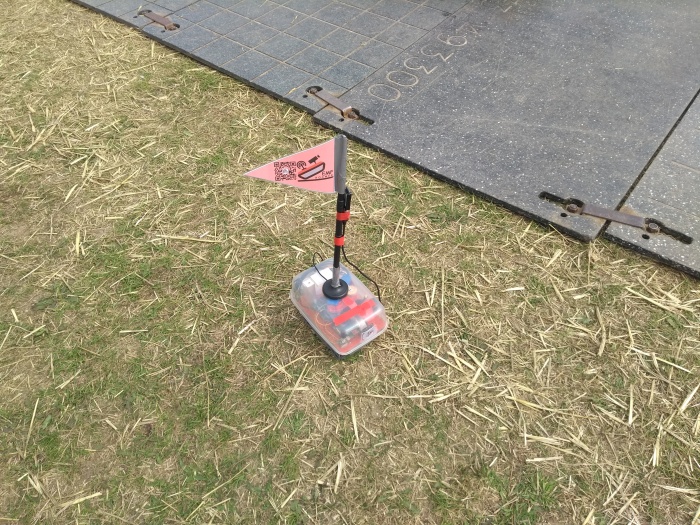 Cat automaton, not sure if this is what it is actually called!

The Mantis – a giant mech with cockpit and serious industrial actuators, they must have needed a fair sized truck to bring this in! 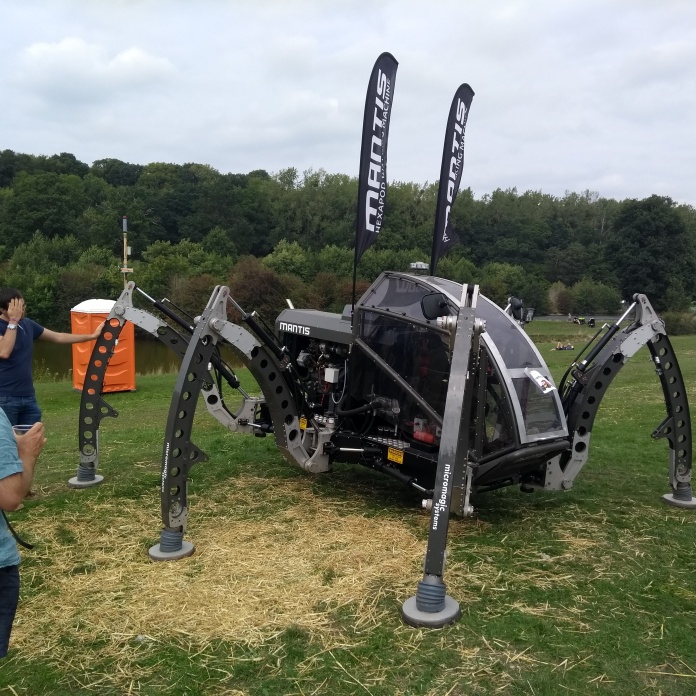 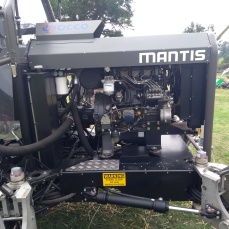 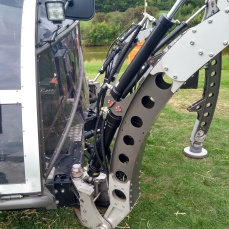 I think this was some kind of large CNC farm bot with a rotary ploughing bit:

Many attendees were smart enough to consider bringing on site transport, and these devices were seen in use transporting goods and mail around the site, ferrying passengers and taking part in “Hacky Races” on an improvised hay bail track:

The camp at night:

At night, the lights would come on! There were approximately 37489032.421 programmed RGB LEDs on site:

Richard Sewell from Bristol Hackspace makes these crazy fabric inflatables which can be automated or controlled by a microcontroller. Servo controlled air vents on the sides of the sculpture allow quite a degree of movement:

On the first night as we were wondering around, we noticed the sky lit up with giant laser beams emerging from an ominous plume of fog at a previously quieter section of the camp – as we walked closer we heard pumping techno and drum and bass emerging from this oddity. It turned out to be Null Sector (Or Cybar??) – a collection of shipping containers fenced together to form a makeshift techno club from some dystopian cyber future. Again I can only describe this happening with emphasis: AWESOME!

Null Sector was a club, night time market, bar and a second “Cardboard Arcade” which was made up of Indie video games. Lasers, pyrotechnics, audio-visuals, fog and not to forget the gigantic fortune telling Maneki-neko!

This was an A/V installation in one of the containers: 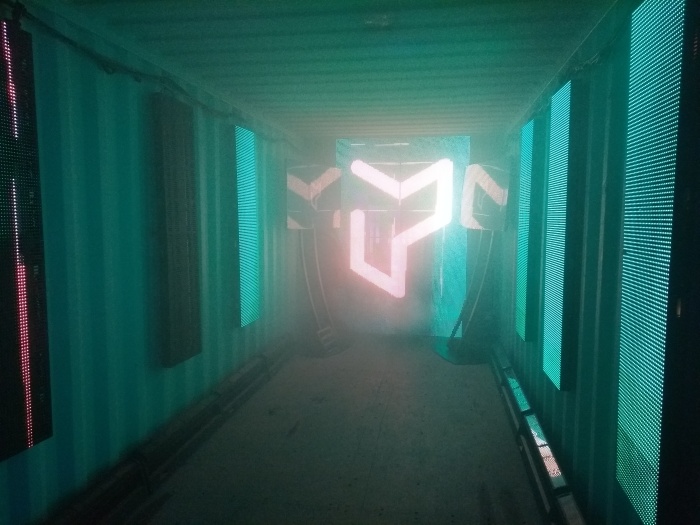 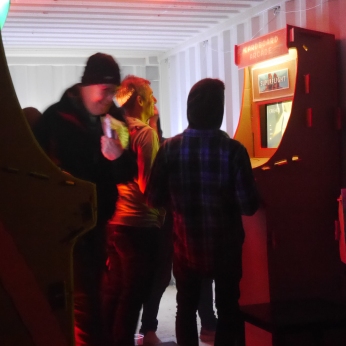 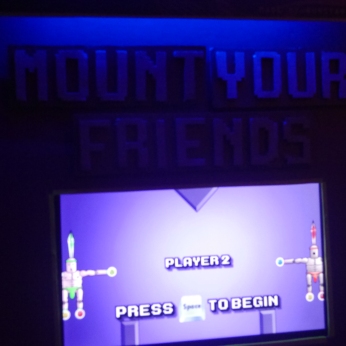 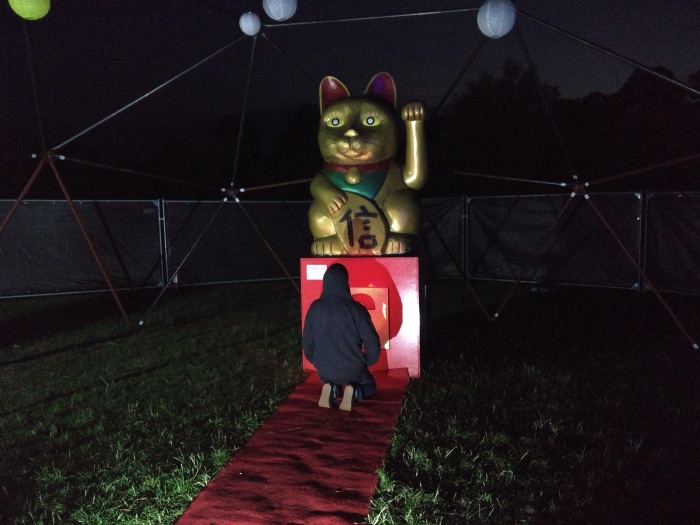 We had an incredible time, we met lots of people, we learned stuff, we hacked, we missed lots of interesting things too – there was too much to do!

Big thanks to the organisers and volunteers who made EMF Camp 2018 happen – I hope there are many more!