Today I focused on two of the projects being developed by the group, one is a wood and acrylic laser cut map of the earth which has been glued together to form a rear-projection screen. The map also has holes ready to wire capacitive touch sensitive points. I have been working on a Teensy sketch to sense touch from those points, and in response is sending MIDI signals into Max/MSP to trigger audio and video events. Hopefully that will all be constructed and functional on Monday.

I also worked on my RFID object detection for the other project, which is now shaping up to be a dodecahedron shaped globe with RFID tags on multiple edges. I don’t know exactly what the outcome will be but the idea is to somehow trigger video by turning the object to different positions. So, I developed a python script on the Raspberry Pi to only update when a new object is detected, and send a message in such a case. I wanted to get that message to Twitter, with the idea that a seperate machine could be watching a Twitter account and could react to particular messages. Though I haven’t used it before, I figured the Node-Red software on the Raspberry Pi would be ideal for this. I spent a couple of hours in frustration over how to actually implement it as I haven’t ever done anything lke it before, but eventually got some help from a chap called Tomas who helped me set up a web socket client in python, and things came together very quickly from there and I was able to send strings straight from python to Node-Red, which would automatically Tweet them. I will do a more detailed write up in a tutorial form at some point soon: 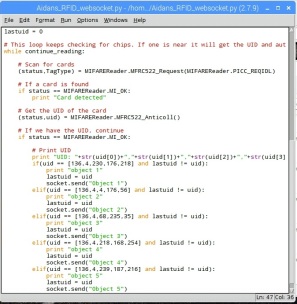 Some more pictures of the reader:

Back at the house in the evening I finally had a good play with the Adafruit Circuit Playground board, which is very fun! It turns out that this board also does capacitive sensing, so I worked on some generative light programming (I love RGB leds!) that reacts to touch. The touch reading I get from the pin is very low, around 1 to 5, and changes in a fairly smooth way as you cover more surface area with a touch. So I made a little sketch that generates a list of random numbers for RGB values across the 10 programmable LEDs where the brightness is capped by the capacitance level. Brightness levels for each colour on each LED adjust smoothly, and a new random number is generated once an LED has finished adjusting. When you release a touch the brightness smoothly drops back to zero – it’s pretty mesmorising to watch!